The little extras add up in Trojans’ first loss since 2019 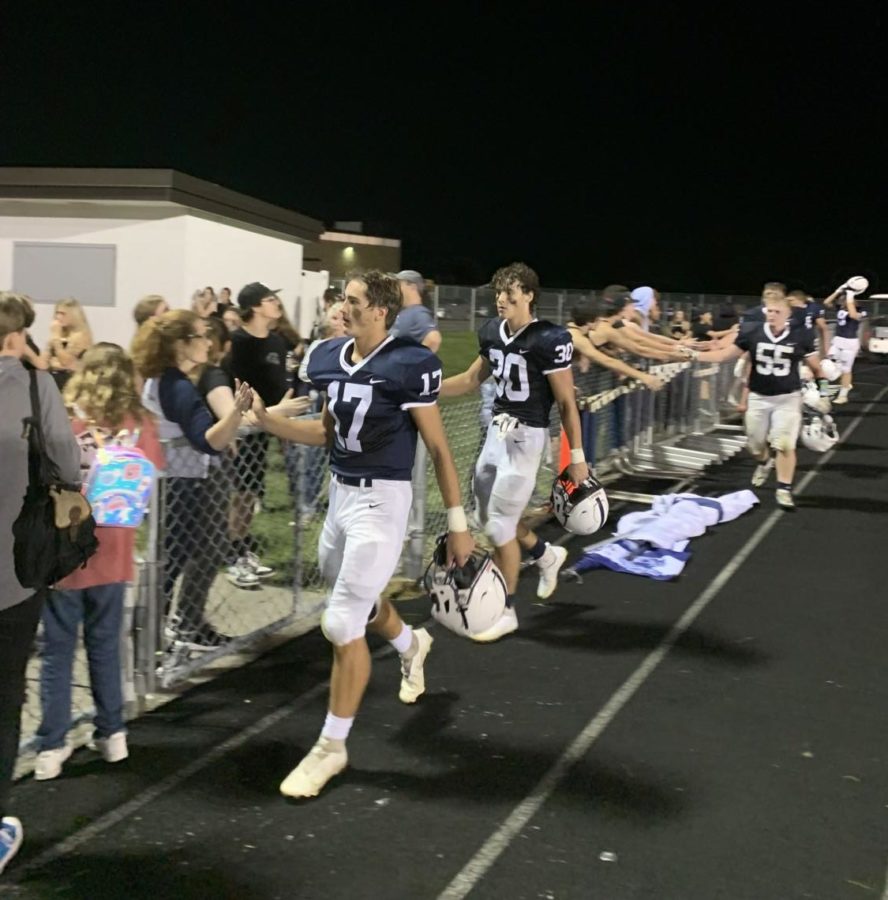 The Trojans perform their postgame high-five ritual with fans after their first loss since 2019.

It’s conventional wisdom that people learn more from their mistakes than they do from their successes. After suffering their first loss since 2019, the Cary-Grove Trojans will have a rare educational opportunity as they reflect on Friday’s game.

Cary-Grove did a lot of things well on Friday night, but in the end the CLS Gators executed better and overall won the little battles throughout the game to earn themselves a close 43-39 win.

“Crystal Lake South made more plays than us,” Head Coach Brad Seaburg said. “They made all of their extra points, executed an onside kick, made key plays at key times, and we didn’t.”

On the other hand, he is not denying how good a game his team took part in, no matter what the outcome ended up being.

“It was a great high school football game,” Coach Seaburg said. “Both teams wanted to win, both teams fought hard.”

The Trojans piled up all six of their touchdowns on the ground, and four of them went north of 25 yards.

Mykal Kanellakis and Colin Desmet had the two longest of the four, at 60 and 71 yards, respectively, and they paced a great running attack.

“We ran the ball well. We had a lot of success,” Coach Seaburg said.

On the other side of the ball, CG had a lot of trouble with pass coverage and stopping the South offense overall, as CLS racked up 140 passing yards on their passing touchdowns and had some success in the running game. Their only rush touchdown came from a yard out by Nathan Van Witzenburg.

They also had two big pass plays in the first quarter, the first one putting them in Trojan territory, and the second putting them inside the red zone. Minus a Colin Desmet interception on a tipped pass in the fourth, the Gators’ passing game, led by QB Caden Casimino and WR Colton Hess, was a big part of their success.

However, Coach Seaburg not only took away what needed to be reviewed from his defense, but that the eleven on D showed a lot of grit in the back end of the game to help out however they could.

Although the Trojans ultimately lost in a hard-fought game, Coach Seaburg knows his group put everything they had on the field, and that is what is important when reflecting on this week two contest.

“Our team gave it our all,” he said. “We did. We just need to execute better, and then you will see the results on the field. It certainly wasn’t for a lack of effort.”