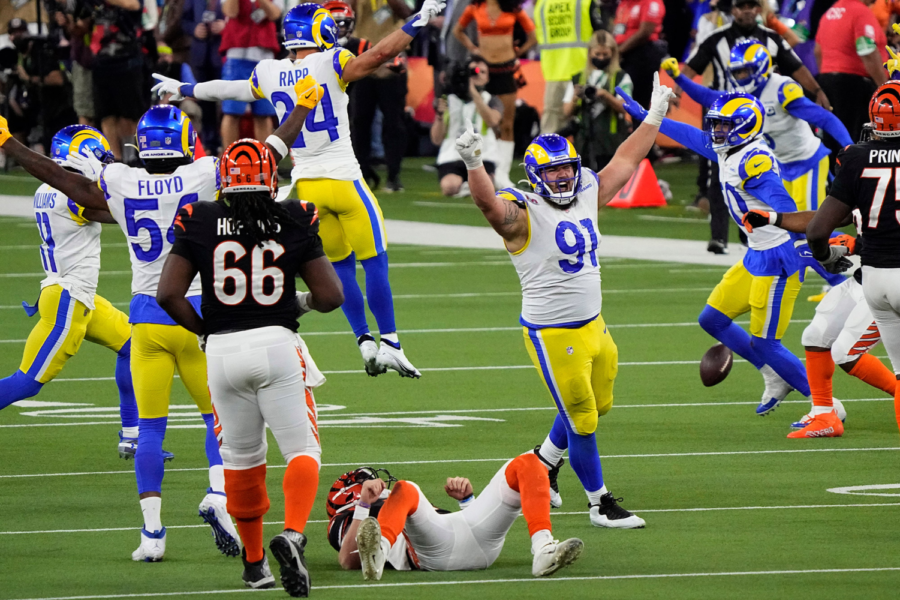 After all of the pressure seeping in from the outside, making sure to emphasize that this team had to win the Super Bowl with all of the talent, lack of Round 1 picks, and market they had, they did it.

The Los Angeles Rams held on to a thrilling 23-20 win over the Cincinnati Bengals to clinch their second Super Bowl title, doing so the first time as the St. Louis Rams in the ‘99 season.

Points came at a premium in this one, with the two teams combining for 43 points. The Rams defense held the powerful Bengals offense to only 10 points in the first half. The defense had to do that heavy lifting because the Rams’ equally potent offense struggled to get points on the board.

The Bengals defense wasn’t far behind, only surrendering a field goal more to the Rams, their deficit three points heading into the third quarter.

The Bengals used the coin toss that they won at the top to their advantage, with the help of a pull of the face mask by wide receiver Tee Higgins, to take a 17-13 lead to open the third.  Two field goals, one by each side, kept Cincinnati up by four, a 20-16 margin, heading into the fourth.

As we all know, champions have that one moment that defines their success, a moment that makes them champions.

The Rams had that moment. Or moments, to be exact.

The final drive for the Rams took 15 plays, as they drove 72 yards and deleted 4:48 of the fourth-quarter clock.

Wide receiver Cooper Kupp, the NFL’s offensive player of the year, triple-crown winner (leading NFL in yards, touchdowns, and catches), and eventual Super Bowl MVP, was held to a measly four catches and only 53 yards receiving up until that final Rams possession.

Kupp finished his last drive of the season hauling in four more catches, one of which was the eventual game-winning touchdown, and 39 yards receiving.

The job was not finished, though. The offense and Cooper Kupp would not be enough to win it all for Los Angeles.

Cincinnati still had 1:25 at their disposal to drive down into field goal range and tie the game. Or, go for the win.

They sure looked close to earning the former. They drove down into Rams territory and were faced with a 3rd and 1.

When you’re up against the Rams defense?

First, the Rams forced 4th and 1 after stuffing running back Samaje Perine.

Then, on the aforementioned 4th and 1, 3-time defensive player of the year Aaron Donald made his way into the Bengals’ backfield and put Burrow on a merry-go-round, which forced a low throw that fell to the ground with no shortage of stress beforehand.

Donald had little impact before that play, even though he usually gives offensive coaches nightmares.

However, what separates the champions from everyone else is their ability to shake off the rust and provide gold when needed.

The Rams’ two best players surely did that, and then some.

To no one’s surprise, Cooper Kupp ended up winning Super Bowl MVP after his electrifying final march down the field.

To no one’s surprise, at least in Detroit, Matthew Stafford provided another gritty, glorious, great moment to will his team to a win.

To no one’s surprise, Aaron Donald made a game-changing, game-winning, championship-clinching play.

A great team that became great because of their willingness to risk-reward it.

That risk-reward philosophy certainly paid off in the end.