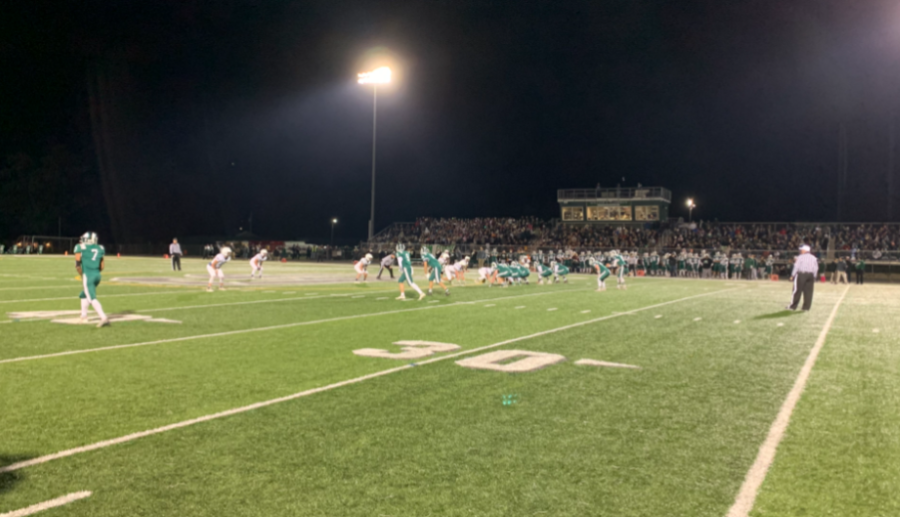 As we all know, this season’s Cary-Grove Trojans varsity football team has leaned on the ground game to win games. The running attack for CG is the team’s identity, really.

It’s crazy how one night can change things.

The Trojans used all three phases of the game to blow past Grayslake Central on Friday by a score of 55-27.

Cary-Grove started off the game slow, as the Rams pushed themselves down the field and took an early 7-0 lead over the Class 6A two-seed.

No lead is safe against these Trojans, however. Unfortunately for Grayslake Central, their lead came very, very early. Too early.

Check off one phase. The defense then did their part on the next drive for the Rams.

Senior kicker and defenseman Toby Splitt came up with an interception last week in round one, and he had another pick this week to give Cary-Grove the lead. He ran down the right sideline and was gone after that.

“It created a lot of confidence for our guys,” Head Coach Brad Seaburg said. “Not stopping them in that first possession, getting the turnover in the second possession, [it] just started up a tidal wave of momentum.”

After the defense made perhaps the play of the game, Cary-Grove just kept pouring it on. After Grayslake Central turned the ball over on downs, the Trojans extended their lead to 14 with a rushing touchdown on the next drive.

Cary-Grove took a 21-point lead into halftime after yet another touchdown late in the half. The Trojans started off the second half with the football, and did their usual thing.

Senior Nick Hissong took a handoff from Sheehan and ran all the way into the endzone, 55 yards, to create a 35-7 lead for Cary-Grove after Splitt nailed the point after.

Cary-Grove started off their next drive at midfield, eventually driving down inside the Grayslake Central ten-yard line and finishing off another great drive with a two-yard Hissong touchdown run.

The Rams’ offense had no chance for relief as they got stopped once again on their next drive and allowed a 54-yard rushing touchdown to Trojan sophomore Andrew Prio on the ensuing possession.

After Cary-Grove finished rattling off 48 straight points, the Grayslake Central offense finally had some positives, as early into their next drive the offensive line created holes for a long run by the Rams.

The Rams, in this type of game, would have to pull out the stops to have a chance. Grayslake Central converted an onside kick attempt recovered by Jaeger Breault to give the Rams another possession, this drive for Grayslake Central starting at their own 49-yard line.

The Rams were able to drive deep into Cary-Grove territory, ending their second touchdown drive in a row with a 24-yard Overstreet strike to Miller to cut the Trojan lead to 27 after an Ethan Espinelli extra point make.

Cary-Grove notched one final scoring drive, a rushing touchdown, to put a cherry on top of this game.

Well, maybe the cherry was when the special teams unit blocked the final extra point of the night after a Grayslake Central touchdown pass, the man doing the honors blanketing the ball as he lunged for the block.

This whole-team performance is what everyone needs for playoff success, and Coach Seaburg was happy about the great team play throughout the win.

“It was great to get a passing touchdown, some long plays on the perimeter, and Nick got some scores inside,” Coach Seaburg said.

The Trojans, although two wins away from the elusive state championship game, still feel they have some things to patch up before heading into their quarterfinal game against conference foe Crystal Lake Central.

Coach Seaburg is one to not overstate anything, so it’s expected that his goals for the team in the playoffs are simple.

“In the playoffs we have one goal, and that’s to win, in the quarterfinal against whoever we play,” he said.

Speaking of the quarterfinal, it will be at home on Saturday, November 13, at 1 p.m., vs. the aforementioned conference rival Crystal Lake Central, who upset four-seed Deerfield 14-7.

Two is the magic number for the Trojans, and we will see in the next couple of weeks if Cary-Grove brings that number down to one and then zero.