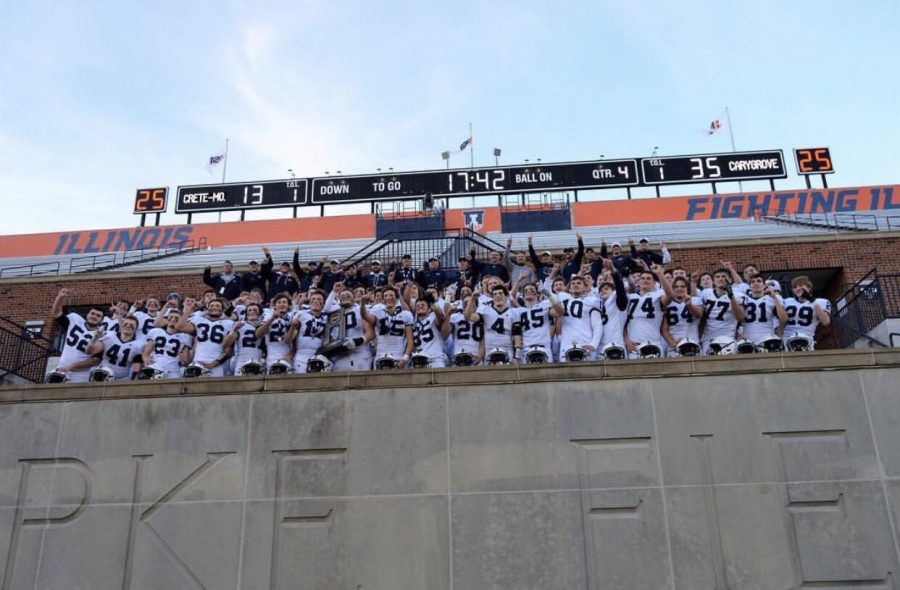 If you were new to the area or new to this school, it wouldn’t seem out of the ordinary. If you’d been living under a rock since the 2017 season, you could walk right in the chain link fence and up the unchanged bleacher seats, sit down, and not notice a change. It wouldn’t be until you do a complete 180 and turn your back on the field that you’d notice the one difference — four numbers added to a humble sign on the front of the press box: “2018.”

Traditionally proud yet unflashy is the name of the game for Cary-Grove Trojans football, who over the last 20 years have stapled themselves as a conference and state powerhouse.

Is it still incredible to think about? Yes. However, with every championship, after months of celebration and wait, comes a target bigger than any other team carries: being the defending champs. The Trojans all need to learn to play under that pressure, even if they weren’t starters on last year’s squad.

Every player and coach, not just the Trojans, likes to say at the start of every season that it’s a new year, a new team, and a new chance. While that’s very true, it’s even more the case in high school sports. People graduate, younger people move to varsity, people join and leave. Every year truly is a new team.

Johnson and his fellow 2020 grads are now entering a role three years in the making, the senior leadership role they’ve seen guys such as Danny Daigle, Max Skol, Addison West, and Quinn Priester play. They hope to take what they’ve learned from playing with these and other players into their fourth and final year.

“Being a senior has changed my perspective a lot,” Nate Desmet said. “Everyone is looking up to you to lead the way and lead by example. I’m looking forward to the new team.”

“Helping the younger kids is huge,” senior Gio Lanera added. “Not just for this season, but for many seasons to come. We’ve all grown up so much from freshman year.”

Just as they did in week one of last season, the Trojans will look to defeat the Crystal Lake South Gators this Friday the 30th. It is the first time, however, that the Trojans have visited “the swamp” since September 2016 (a 59-0 Trojans win. Let’s hope history repeats).

The Trojans barely beat the Gators last season, which ended up being one of the closest games all year. Last year’s Gators went on to lose in the second round of the 6A state playoffs to, drum roll please, Niles Notre Dame — an opponent who came within seconds of almost ending the Trojans championship run last season in the semifinals (keyword: almost).

This year, the Trojans ride that championship season and returning talent into a preseason state rank of seventh overall, well above the rest of the conference (Prairie Ridge 25th, CL South 94th, Huntley 96th). None of this matters, however, until the first kickoff around the conference Friday night. Then we will see actual FVC football yet again.

“We’re champing at the bit, ready to roll this weekend,” Johnson said.

A year ago, most every coach and player agreed that after the stunning playoff loss in 2017, the chance at a new season was not only its own, seperate season, but also a chance to learn from your mistakes and have that extra determination.

In many ways, it’s a similar mindset coming in to 2019. While it is a new, separate season with a new team, it also is made up of determined, experienced players who know now how the ultimate success feels, and are determined to lead the way back.

That’s the beauty of long-term success, isn’t it? You don’t make the playoffs 15 straight years without remembering the keys to that success and carrying it into every year. Senior leaders teach underclassmen, players gain experience, the cycle repeats.

Some special years, four little numbers are added to the front of the press box. Every year, however, there are lessons that stick around right into the excitement of the next season’s kickoff.

I’m looking forward to another great season, both for the team and the community. I’m excited to not only be in my third year of football beat reporting as a senior, but also the editor-in-chief of the CG Trojan Times. I encourage you to check out other stories from around the school when you’re at the site this season, and to follow both my Twitter (@mfojr) and @CGTrojanTimes for more content.

Thank you and go Trojans,