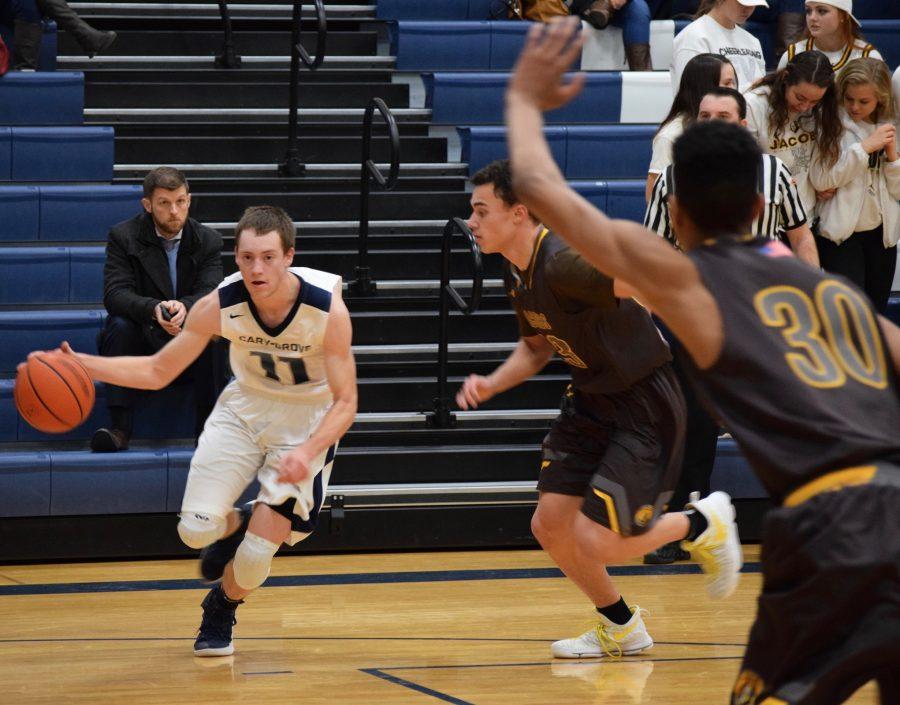 That’s been the motto of the 2016-17 C-G varsity basketball team, according to Coach McCloud. In the 2015-16 season, this team had six wins. After their recent win at CL South, this new team is two away from doubling that.

One of those tough-loss situations came on a Friday night. A packed lower gym saw the Trojans battle it out with the conference’s first-place Prairie Ridge Wolves. With a C-G nine-point third quarter comeback, the game was split at 33 points a piece. On a free throw, the Trojans went up 34-33 early in the eight-minute final quarter.

As if this low scoring, defensive game couldn’t get any tighter, it wasn’t until about four and a half minutes remained that PR scored to take the lead. Though the Trojan effort and relentlessness never lacked for a second as the clock wound down, the Wolves would take this bout 42-36.

After the game, senior Danny Clarke, a starter for the team, said they struggled with first-round turnovers, and that this week in practice he believes the team needs to focus on ball handling and defense. His focus on improving for the next game and not dwelling on regrets fits the team’s “relentless” motto.

“It just means having that mindset of we’re going to keep coming and coming,” Coach McCloud said. “Even when we’re down, we’re never going to stop. It’s like a mentality of never quitting.”

They showed that grit against the Wolves that Friday night. This isn’t a team that is easily discouraged. They are proud of their improvement and believe they can win every second of every game, no matter the opponent. They see how massively this organization has changed in just one year.

Tuesday night, the Trojans defeated Crystal Lake South by ten. This was the first C-G away game win against the Gators in five years. Also, earlier this year, CG won a Thanksgiving tourney in Woodstock.

Both Clarke and Coach McCloud told me this week they are going to practice harder and keep working. Their fans are excited to see if this rapid improvement continues.