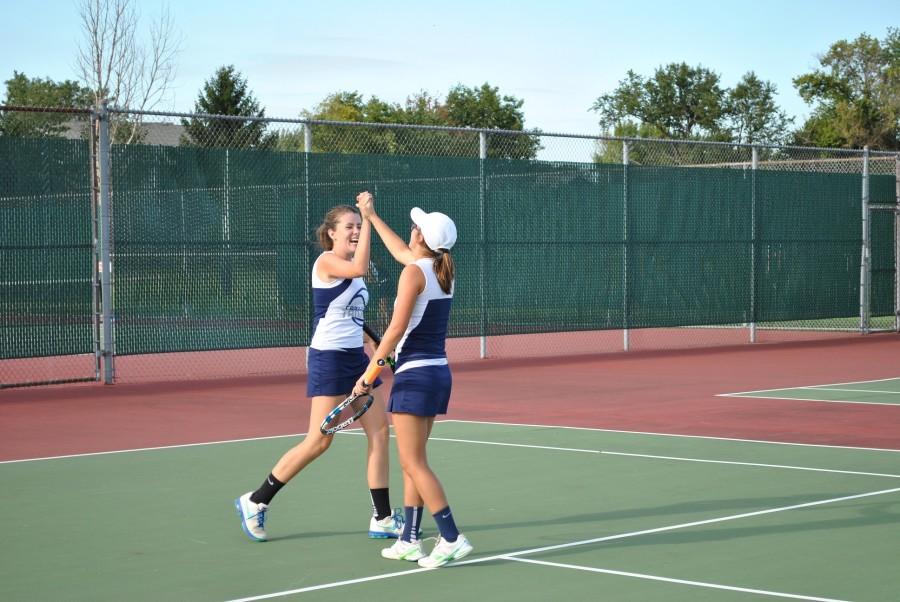 The girls tennis team completed a strong season, placing fourth overall out of 13 teams in conference.

“It’s been a really good season and the girls have stepped up and played well,” Coach Laurie Bender said.

The varsity finished with a conference record of 9-3 and their overall record was 11-6. In four of their victories, they won the match a perfect 7-0.

Although it was a really good season for them, such results were not possible without hard work.

The girls practiced a lot. In the preseason they ran double practices, practicing four hours in the morning then two more hours of match play at night. They also ran three times a week to stay in shape.

Those were just two of many memorables matches this season.

“My favorite memories would be the big wins that kids had,” Coach Bender said. “One of the big wins that we had was in conference when kate won her (semi)final match in order to play in the finals for 3rd singles. She was so excited and she wanted it so badly and she worked real hard in that match. And that’s just one example. Another favorite was when Cam and Emily won their first set and in the second set were down 1-5 and came back to win the second set 7-5 to win the match.”

It was in these matches and some others, like against PR, where triumphs and challenges arose for the girls.

“Praire Ridge was hard for us (as well as) CLC and a lot of times skillwise there were challenges but it was more mental game that we had to overcome,” said senior captain Lauren Betz, who played first doubles. “PR was really good at getting in our heads and we had to overcome them (by) having fun.”

Although some matches were hard, the girls learned a lot from them.

“I need to work on our mental game,” said senior captain Tori Baranowski, who played first doubles with Betz. “Half of tennis is the mental game and when you miss that half then your play just goes down significantly. If I want to continue to play tennis in college for a club team then I am going to need to work on that to win.”

Despite the challenges of the season, the girls still bonded well.

“I love my teammates,” Baranowski said. “They are just really energetic people they are always excited to be outside.”

Betz agreed with her playing partner on the team dynamic.

“My teammates are really energetic and fun and they wanted to be there because they all love tennis, and we all love the sport, so it was fun to be with girls from all different backgrounds and places and a lot of different things, but we all just come together to have fun with it,” she said.

While training and the mental aspects of the game proved to be difficult for the girls, they showed what was really driving them through their season.

“The most important thing would be probably be to have have fun and do what you love,” Betz said. “Tennis was a huge part of my life and I really enjoyed it. It taught me how to work hard and how to be dedicated and just have fun and enjoy the sport.”