The ‘Final Four’ in their final year 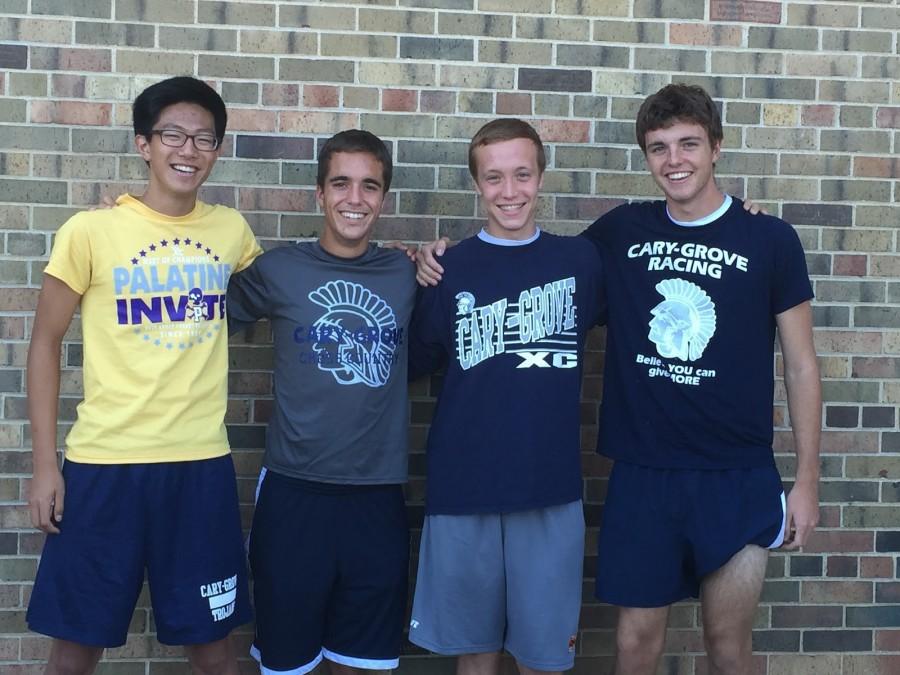 There is always a bittersweet feeling when change is fast approaching. Senior year, for many, is a year of lasts. For four members of the Cary-Grove boys cross country team, Sept. 22 marked a significant “last” — their last in-season home meet at Hickory Nut park. Sang Seo, Regan Cossey, Ryan Pinter, and Joe Lundin are the “four lone survivors” to stay with the program through their time at C-G.

“It was incredibly surreal to think that I’ve been running there for four years and this was the last time, but it definitely motivated me to do well,” Pinter said of the influence this final chapter had on his race.

However, not all of the seniors got to race on Tuesday. Seo suffered a stress fracture and has had to miss the season thus far.

“It kind of sucks, not being able to race in it,” Seo said, but “it’s a new experience, a new memory to hold with me, keep with me. I think I will remember this for a long time.”

They all came into the program as freshman, and depending on who you ask they will each tell you a different reason of why they joined the team. But ask them why they chose to stay while the other ten or so peeled off before the fourth season, and they all say a similar thing.

“I joined cross country to be with my friends,” Lundin said, “but it evolved into me loving the sport, loving the people, and loving the community.”

Unlike other team-based sports, the groups of cross country are small. Varsity consists of just the top seven runners, the Frosh/Soph team comprises exactly what it sounds like, and the Open group consists of the juniors and seniors outside of the top seven. All together this season, the team consists of 35 guys.

As one may guess, this leads to a very close-knit group of athletes. There is almost a family dynamic to the team. They all learn from each other, although the seniors tend to feel an extra responsibility to be role models to those younger runners, whether that be leading by example, or just cheering other teammates up during a dull moment.

“It’s weird, you think about when you were a freshman, and you look up to these big seniors who seem so old,” Pinter said.  “And now to know that I am that person, it’s cool.”

Seo, the team captain, doesn’t feel he has taken just one person in particular under his metaphorical wing.

“I want to stress that the freshman group as a whole this year has been really great,” he said.

The boys credit some of the past runners, such as Michael Saxon, who graduated in this past spring, and Griffin Dempsey before that, for making a difference for them when they were younger. However, they all said they learned something from just about everyone who has had the privilege of being a part of cross country.

It’s not just the boys who notice the difference that cross country has made for them. Mrs. Pinter (Ryan’s Mom) said that she was proud that her son got to be a part of something this special.

“[The team] is full of these boys who are so great, and work so hard, and they all do something so different than other kids, it’s amazing,” she said.

Looking back on those four “amazing” years, the boys reported few regrets about their experience.

Lundin says his only regret was not participating in track all four years in conjunction with cross country.

“I mean, I wish I was faster, but that’s just genetic,” Cossey said. “But no, I’ve been happy with everything I’ve done, and everything that has happened to me.”

None of the seniors plan on running for a team in college, but running definitely isn’t out of the picture. Not all of them have decided on their dream schools, but with Northwestern, Minnesota, North Carolina, Michigan and ISU in the mix, it is safe to say that these boys have a bright future ahead of them.