Despite rumors, no changes in store for volleyball assembly 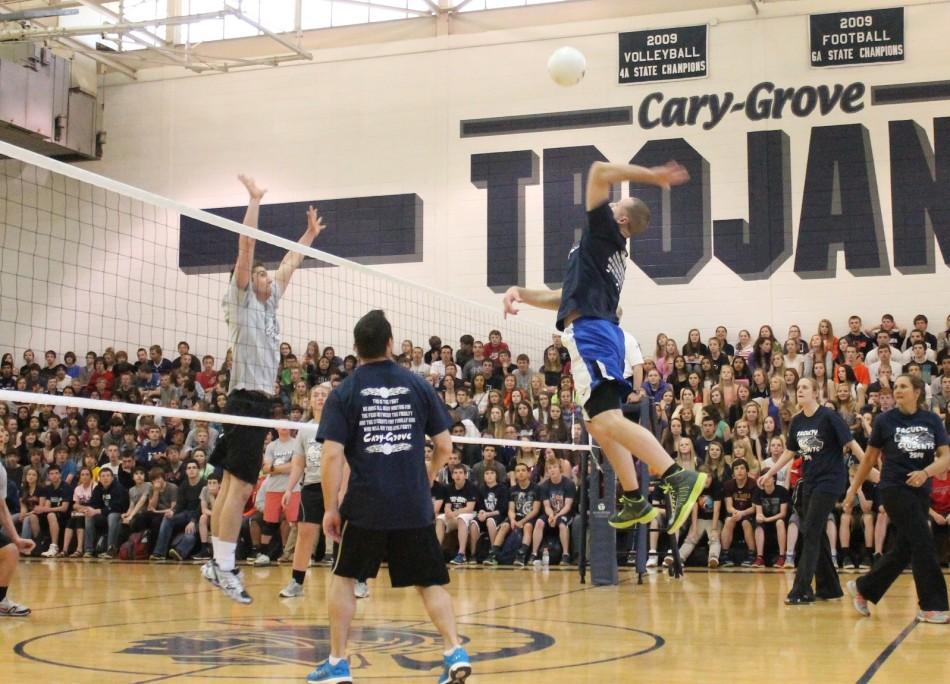 This year’s faculty-versus-student volleyball game provided its usual drama before the teachers eventually won it, but there was an extra layer of interest this time around regarding the game’s future.

Rumors circulated through gym classes that the game was going to be canceled in the future, and many students voiced their opinions that they enjoy that specific assembly as a whole and don’t want it to come to an end. However, those rumors are false and the faculty-versus-student volleyball game will continue to be a yearly event.

Although the assembly of the final game may be the big event, the volleyball tournament itself that is held during gym periods also holds an importance among the students of Cary-Grove.

“I know the tournament is a special event for the students,” Mrs. Langanis said. “This year we had over 600 students register to participate in the student tournament. All have the hopes of playing in the assembly and, ultimately, defeating the faculty team.”

One concern that has come up in regards to the tournament, however, is the fact that students are missing class toward the end of the tournament in order to play teams from different gym classes.

For the students, the main goal throughout is making it to those two final games during the assembly and in order to do so, they need to beat out all the other teams in the tournament. This, in return, requires them to miss some class time.

“The PE program understands that it is always difficult to pull students out of class for field trips, sporting events, assemblies, etc,” Mrs. Langanis said. “As a department, we give back a great amount of student time to the classroom teachers each year by being the department that relieves much of class time missed by students by hosting the blood drive, ID pictures, bus evacuation, beginning of the year dean talk, ACT talk, etc.”

Year after year, the tournament and final assembly change in an attempt to satisfy everyone. Although Mrs. Langanis would like the final assembly to have a pom or cheerleading squad supporting either the faculty or the students, as of now, there are no confirmed changes that are going to be made to the overall structure.

Another suggestion for changing the tournament is how the final student team is picked. While the faculty team only consists of players that are experienced volleyball players, the student team never has that promised to them.

One possible change to the structure could be that for the final student team, the best three girls and the best three guys from the tournament are guaranteed a spot on the team. This would make the playing field more level and give the faculty a run for their money in the final game, though it would also dramatically change the purpose of the tournament leading up to it.

“I would be opposed to the top three female and three male students at this point,” Mrs. Langanis said of the suggestion. “It would really eliminate the hope of many students that someday, they may be able to make it to the assembly.”

It’s also true that the student team sometimes does win over the faculty under the current setup. Therefore, there doesn’t need to be any drastic change in order to level the playing field.

“The faculty, sadly, does not always win,” Mrs. Langanis said. “Just ask Mr. Cook or Mr. Rogers about the most notable losses. There is a reason that Mr. Cook has never participated in the tournament since the ‘incident.’”

While different propositions are still up in the air in regards to next year’s game, for now, everything will remain the same and the rumors that were spread will be put to a rest. The administration and PE department are trying to come up with the best possible solution where everyone ends up happy — students and faculty. And even though the faculty may have won this year, there is always hope for the students in the upcoming years.