Looking back on a season of dedication 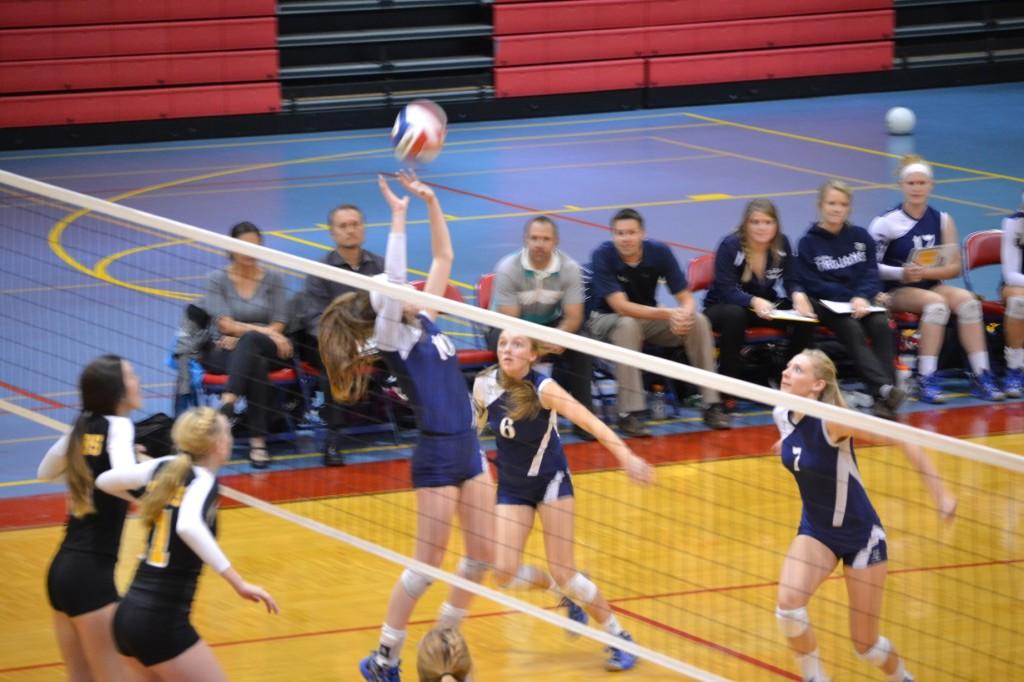 It can be tough reflecting on a team that has been eliminated from the postseason, but with an 8-4 record in conference and a second-place finish in the Fox Valley Conference, Cary-Grove volleyball executed an excellent season.

All the players were proud of their performance in conference play. Coach Patty Langanis said that they peaked at the right moment, improving from the beginning of conference play consistently through the end.

Both of the team’s captains had techniques they utilized throughout season to contribute their part to the conference record and growth of the team.

Senior captain and setter Meghan Seymour said she “focused on being a tight knit group. C-G volleyball is being a family and really [being able to] count on each other.” The girls are comfortable with each other at a level of friendship; working beside one another for months, they have a high level of camaraderie and are the kind of friends who can laugh at anything together. The Cary-Grove program is not all games though.

“I’m [the girls’] hardest critic, letting them know what they could be doing better,” Seymour said. “But I reward them when they do well.”

The other senior captain and middle blocker, Kayli Trausch, shared a similar view of the seriousness of high school volleyball. She spoke of the mental challenges of the game, especially with such a young team (the captains are the only seniors who returned for the 2013 season).

“I try to keep people from getting in their own heads,” the six-foot middle blocker said. Bree Coffey is a player who used to struggle with this, but Langanis says she no longer fights that battle and has “improved mentally,” listing her as a strong contributor to the conference season this year.

Also on this list of difference-makers for the team are Seymour (“the heart and soul of this team. [She] drives them every practice and every match”), and Abby Schebel, who has become a dominant outside hitter. The players listed teammates Sarah Graham and Erin Olson as others who stepped up and stood out this season.

Graham “is getting better every day in practice and working to be [the best],” Trausch said. Olson did very well for her first varsity season, playing right side despite being a setter by trade.

“She also adds a lot of energy to the team,” Seymour noted. A rock-solid libero in Delaney Bayer has set a firm foundation for the team. She is tough mentally and performs reliably every match. With this line up, the team was able to accomplish their conference record.

In preparation for the postseason, the team studied game footage and worked to speed up and switch up their offense, preparing almost a week in advance for their first game of regionals.

“We [thought] we have a shot to make it to state. We [had] to [go through] the hardest conference, however,” Langanis said, noting the challenge that was before them.

In the end, the team did not meet the challenge. They beat Jacobs in the first round at Dundee-Crown High School, playing three riveting games with tight scores. The teams were equally matched but C-G came out on top, owing their win to Allison Splitt’s serving runs off of her hard float serve and Morgan Lee’s driving top spin, acing Jacobs on multiple occasions. Both these servers performed at crucial times, gaining a lead on Jacobs at the right times during the games.

However, the game against Crystal Lake South turned out differently. Similarly, the games were close, but the roles were reversed. South pulled ahead at the right times and squeezed out the win, Cary-Grove just barely behind. Despite the loss, Seymour is still proud.

“Even thought we lost the game, I’m proud of the girls and how we pushed to keep our season alive,” she said.

Traush elaborated on that, saying “You could see that every single one [of us] wanted [the win] just as much as the other.”

The team ended on a high note despite the loss to South. The girls are proud of their accomplishments throughout the season, and the seniors feel that they are leaving behind a team that can continue to achieve great things in seasons to come.

“I have high hopes and high expectations for the team next year because I know they can reach them,” Seymour said. “This year there [were] so many young girls and now they have the experience to carry this team. I know the soon-to-be seniors will lead the girls because they have seen from previous years what it takes to be a part of the CGVB family. They will do anything to bring Cary-Grove back to Redbird Arena.”

With parting words like that, one can only see the team excelling in the seasons to come. It looks like we can expect great things from the 2014 season and beyond.