Hanselmann is first-rate in C-G’s secondary 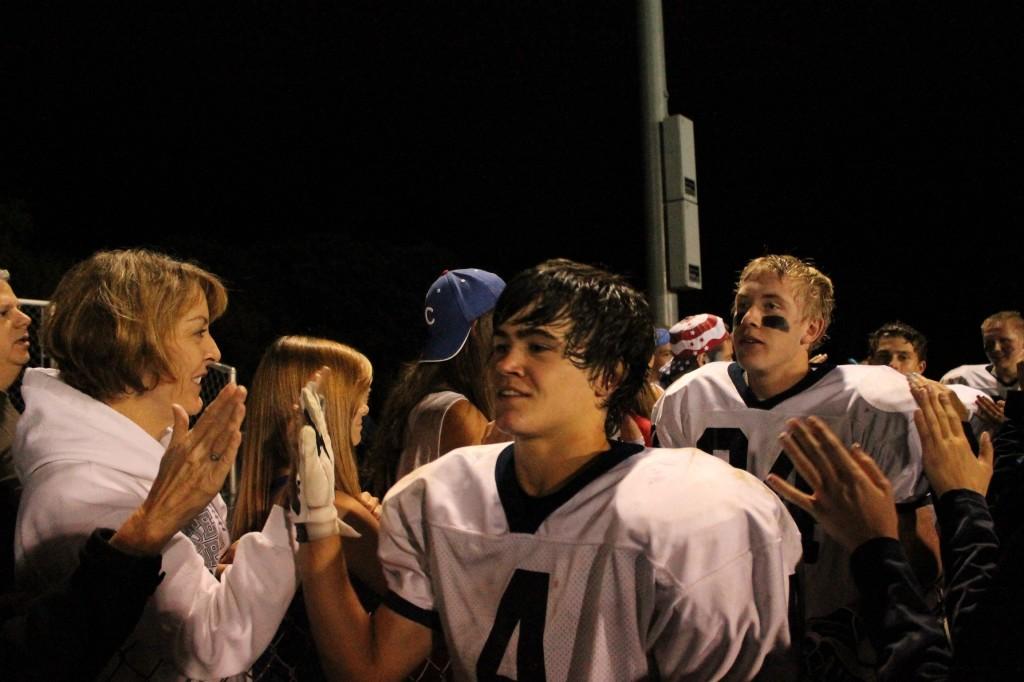 Junior Larkin Hanselmann celebrates with the crowd after a victory.

It’s time to shine some light upon a certain individual who has had one heck of a football season so far and is shockingly only a junior – Larkin Hanselmann. Wearing the number 4 jersey with pride on the football field, Hanselmann comes out each and every game ready to play. Not only is he a great player individually, he is also a huge part of the team as a whole. Although he may not be one of the biggest guys on the team, Hanselmann doesn’t let that affect his game day in and day out.

The people that have been to a football game already know how well Hanselmann has been playing this season. To the people who haven’t attended a single game yet, it is probable that they have still heard of this star athlete whether through friends or through other sources reporting about the Cary-Grove football team.

One huge supporter of Hanselmann is his older brother, senior Logan Hanselmann. Logan has attended every game thus far and cheers his brother loudly from the stands.

“I’m very proud of how he is playing right now,” Logan said. “He is playing aggressive and with nothing to lose, just how the game is supposed to be played.”

Larkin Hanselmann’s brother is not the only one that is proud. Larkin himself is not only proud of how his season is going, but how his team is playing together as well.

“I’m most proud of our game against Huntley, because I feel like we really came together as a team,” he said. “My [game-altering] catch would have never have happened if the line didn’t give Jason [Gregoire] the time he had and Jason threw a perfect pass.”

Hanselmann has full support from his teammates. Seniors Matthew Hughes and Jack Timmins both have nothing but positive things to say about him.

“Larkin is a great asset to our offense and defense,” Hughes said. “He is a good kid, funny and enthusiastic at practice but also filled with sarcasm and jokes. I look forward to continuing the season with him and will hope to watch him improve as we move on and I follow the team next year.”

“He really surprised me this year,” Timmins said. “I heard from some coaches that he was pretty fast and quick and that is exactly what he is. During our game against Jacobs he made an absolutely incredible interception that was unfortunately called out of bounds by the referee.

“I’m glad to have him as a fellow member of the CG defensive secondary.”

With a sport like football, one has to be focused at all times so not to get injured or make a drastic mistake. Yes, they practice daily and work their hardest at all times, but what really goes through their heads during that time before a game starts? Each player has their own personal way to get pumped up and focus. Hanselmann shares what makes such a difference in how he performs.

“Before the game, I normally have my music in and I just think of what I have to do to win, because I know my teammates know what to do,” Hanselmann said. “I get really excited when we’re winning, and when the crowd is really into it. I always have butterflies in my stomach before every game but once we are winning, they go away and I just try to have fun out there.”

While Hanselmann is having fun out on the field, he’s working his hardest during all his other moments. He is a junior and still has a promising senior year ahead of him, but football season flies by, leaving him with post-football decisions to make. He is a hard-working student who focuses on his school work in and out of football season. Then, when the time comes around, he switches gears from focusing on football and starts to focus more on baseball only to have that season fly by as well, leaving him with off season football agilities.

Clearly, Hanselmann is one busy guy throughout the school year and has lots of support behind him no matter what he is doing. One can find him joking around with his friends in the hallway, working hard in the classroom, or making the winning catch during a Friday night football game. No matter where he is or what he is doing, Hanselmann always puts his best foot forward and continues to grow as a young adult.