Coyotes on campus: Why are they here and are they a threat? 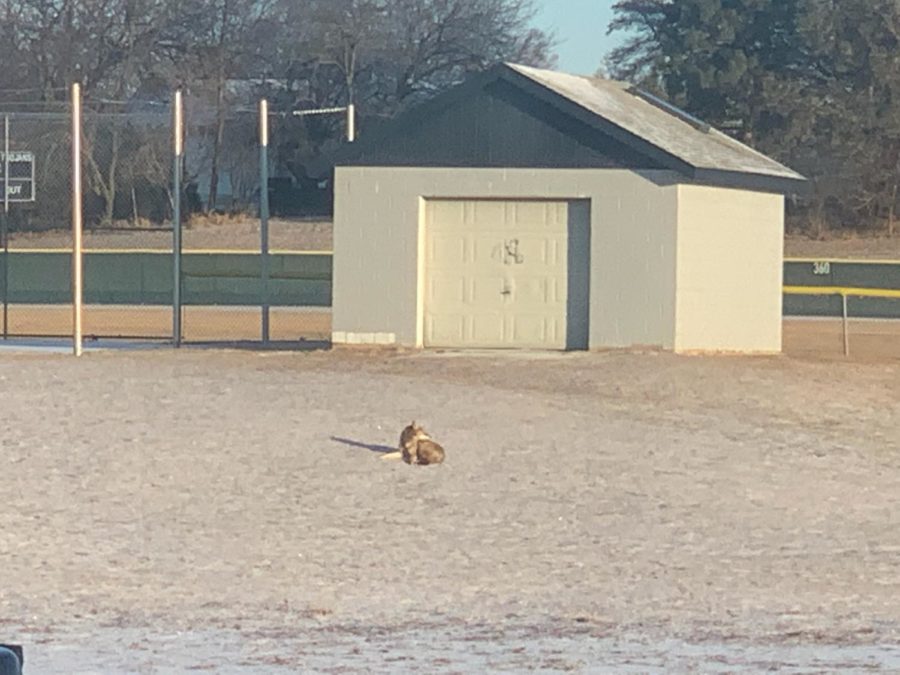 Biology class. Whether it’s something you look forward to or something you dread, learning about biology is really important. It helps us understand more about ourselves and the world around us, and more importantly, the impact we as humans have on our environment.

This becomes particularly clear when that impact leads to disruptions in our usual environment. Lately, there has been an increase in sightings of coyotes around Cary-Grove.

I met with Mr. Huff, a biology teacher here at Cary Grove to try to gain some understanding of where the coyotes could be coming from and why we’re seeing so many of them.

“They’re likely coming from the Hollows,” said biology teacher Mr. Huff. “[The coyotes] have been seen by the softball and baseball fields and the pond.”

His room overlooks the area the coyotes have been sighted, and his students have started looking out the window when they come into class.

It’s uncertain why the coyotes are spending time on the fields, but they were seen by the pond where there were ducks swimming in it. It’s likely that they were looking for an easy meal.

It’s hard to tell exactly how many coyotes there have been as they usually don’t have distinctive markings.

“Earlier this winter, I caught sight of two coyotes and it looked like it was a mother and her pup,” Mr. Huff said.

Unlike many other mammals, coyotes do not hibernate or migrate, so the ones around the school probably live in this area year-round.

“Coyotes’ mating season is usually in the months of January, February, and into earlier March,” Mr. Huff said. “It’s very possible that they could be drawn out from the several conservation areas in search of a mate.”

“The Hollows and Fel-Pro RRR [as well as many other conservation areas] allow nature to exist alongside us,” Mr. Huff said.

Property development that encroaches on conservation areas or a naturally expanding coyote population in those areas could cause coyotes to show up in places they didn’t before.

“When the population is higher in a certain area, coyotes are forced to venture out to find a property that isn’t already taken,” Mr. Huff said.

Even without the conservation areas, coyotes would likely live among us. According to Mr. Huff, coyotes adapt well to city life, and even benefit cities like New York and Chicago by keeping rat populations at bay.

“Coyotes are generalists, and are less likely to go extinct than specialists like owls who are only able to survive in certain areas,” he said.

Coyotes usually choose areas where there aren’t many humans and there is plenty of food. They can usually go several days without eating, but don’t have the reserve to go for longer time periods. Still, even a hungry coyote isn’t something that students walking home from school need to worry about.

“Coyotes aren’t really a threat to humans as they’re more scared of us,” Mr. Huff said. However, he cautioned that pets are at serious risk of coyote attack.

“Always go with our pet when you are taking them out, especially at night,” he said. “Make sure to keep them leashed so nothing happens and keep them close to you.”

If you do encounter a coyote, do not approach them. Wave your arms or throw something in their general direction. Walk away rather than running away. Coyotes can run as fast as 40 miles per hour and will be able to catch up with you if they choose to chase you – but again, they are unlikely to attack a human.

“Coyotes really aren’t looking for a fight with humans and would much rather run away than fight a fight they can’t win,” Mr. Huff said.

Coyotes have a long track record of losing fights with humans. To help keep populations of coyotes at bay, many states have a ‘hunting season’ for them. They’ll play a noise of a distressed animal and have movement to attract coyotes so they can catch them. This is more common out west and in more rural areas.

It’s unlikely that we’ll need to do something like that here in order to remove the coyotes from the places students frequent.

“As spring starts, it’s likely that the coyotes will leave due to gym classes starting to go outside and spring sports starting up,” Mr. Huff said.

Ultimately, if we take action to eliminate the coyotes, we’re likely to create a chain reaction that disrupts the ecosystem and causes a new nuisance for us.

“As humans begin to encroach upon more of their land, it’s likely we’ll have more interactions with them,” he said. “And if we don’t find ways to allow nature to coexist alongside us, we’ll be facing even more problems – problems where nature always loses.”