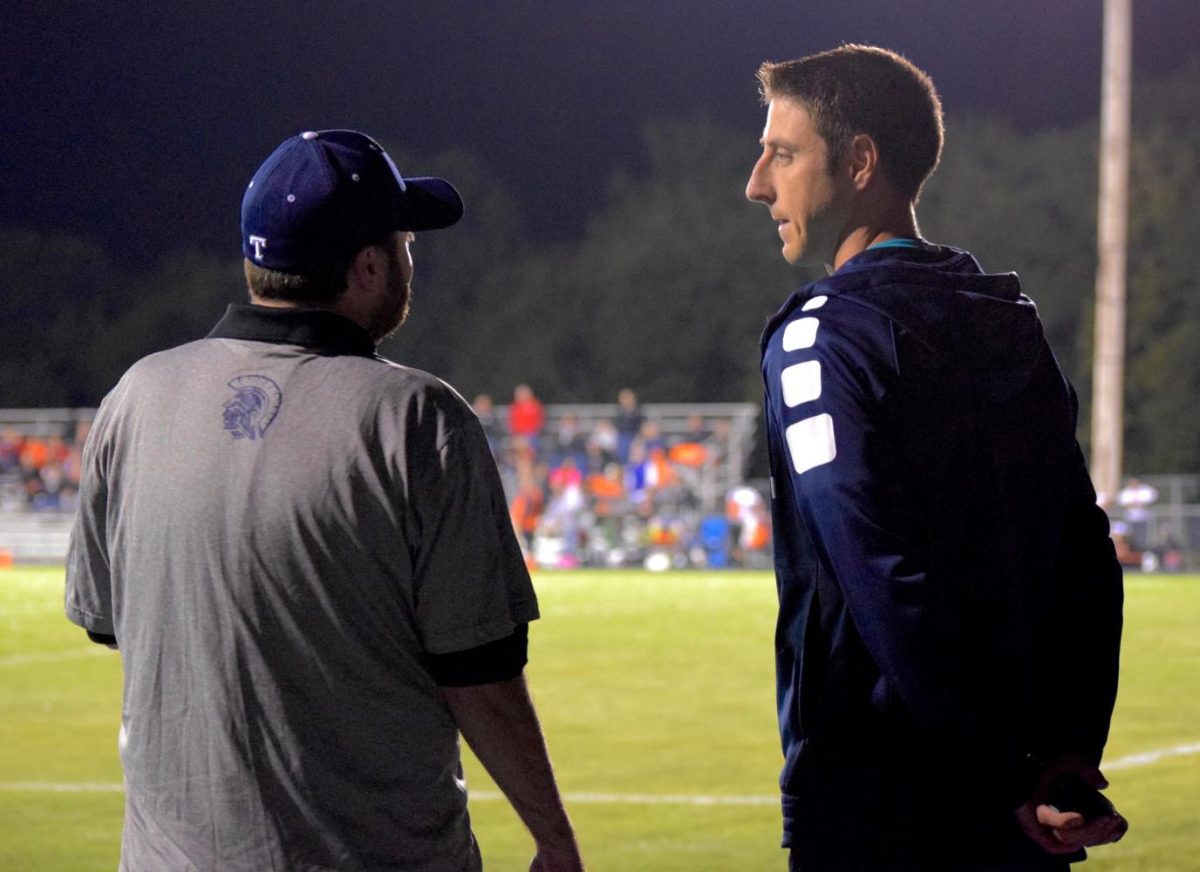 A lot of changes have been made to Cary-Grove this school year. The new grading system, the one-to-one program, and, most notably, the change in our administrative staff.

Mr. Lesinski has really made himself present in his first weeks as principal. Nearly everyday he can be seen welcoming students at the door, as well as bidding them farewell at the end of the day.

“The students have been so welcoming,” Mr. Lesinski said. “The cheerleaders and the superfans had me do a cheer with them on the football field. Amber Olson honored me with a staff appreciation t-shirt and dinner for the volleyball game, and when I walk into classrooms, students are always saying ‘hi’ and telling me how they’re doing and what they’re up to, and so I’ve felt really welcomed into the school by the students, and that’s extremely important to me because that’s why I’m here.”

Other student groups, such as Link Crew, have also included Mr. Lesinski in their back-to-school events.

“Link crew and all the things they’ve been doing with the freshman class and involving me in that, has been a really humbling experience to be a part of,” he said. “Overall, it’s just been humbling to be welcomed into a building like this that’s so close-knit.”

Mr. Lesinski has shown a lot of enthusiasm regarding his new role in District 155. Previously he had been the Curriculum Director for the district, which was something he enjoyed, and yet it lacked something he missed from being a teacher.

“My favorite part, I would have to say, is feeling the energy again from students and teachers in a building. When I was at the district office, I really enjoyed working with teachers across the district and developing those relationships, but I missed the connections I was able to make with students as a teacher, or just as a staff member in a building,” he said. “Now in a principal role, I get to interact with students on a daily basis, whether that be greeting them at the door, or walking into their classrooms, or kind of being a fly-on-the-wall, and seeing what’s going on, to attending some of their athletic events. Just being able to interact with students on a daily basis is something that brings a lot more energy and fulfillment to my life.”

As principal, one thing Mr. Lesinski emphasized is support for students and student groups. He explained how open he is to suggestions from students, and how he is excited to hear from them as to what they have to say.

Although he himself does not have any major plans to make changes or implement anything new, Mr. Lesinski is focused on listening to the students and staff. He mentioned that clubs like Rachel’s Challenge, Interact, and the Latino Leadership Club have come to him and explained what they have done in the past, what they typically do, and what ideas they have for the coming school year.

“I think my goal is just to be present in those meetings, and to voice my support of what they want to do, but I’m never going to try to control their ideas or change their thinking. I want them to be the thinkers and the innovators and the doers and whatever support I can provide, that’s what I’m here for,” he said. “Just making sure that those students know they’re supported, because sometimes even our smaller groups become pretty big movements, and so I want to make sure they know that they have my backing.”

Something exciting that he had also mentioned was the student panels that he had previously spoken about.

“I had said when I was applying for this job, that I wanted to get a panel of student advisors together, and that’s something I still intend to do. I’m hoping to have our first meeting by […] early October,” he said.

Mr. Lesinski is also already learning a lot from his first few weeks as principal, in spite of whatever challenges that may face him in the present, as well as the future.

“I’m learning a lot. I was in a building for a number of years as a division leader and a teacher and a coach, and so you interact with different things that are happening in the building but in a different way. You’re not necessarily the person that’s making decisions, and so what has been a really great learning experience for me is now, interacting in those different situations and scenarios as someone who is making the decisions, I really relied heavily on my team to inform me of their thoughts and their perspectives, based on all their years of experience so that I can make the best decision I can for this building and the students,” he said.

“I’ve really tried to embrace the challenges that come, because that’s part of the role, and I’m never going to get away from those things. There are always going to be challenges, but with the team that we have here and the support I have the staff and the community, I’ve just tried to learn from everybody and make the best decisions I can. I love being in the building, so that’s where I want to be and that’s the part that I am most excited about, to be back with the kids and teachers,” he said.

Overall, Mr. Lesinski has put in a lot of effort to begin his job as principal, as well as the school year, on a positive note.

“I think it’s been a great start. I have big dreams for this school. I think that the students are capable of a lot and I just want to empower students to do things they are passionate about,” he said.