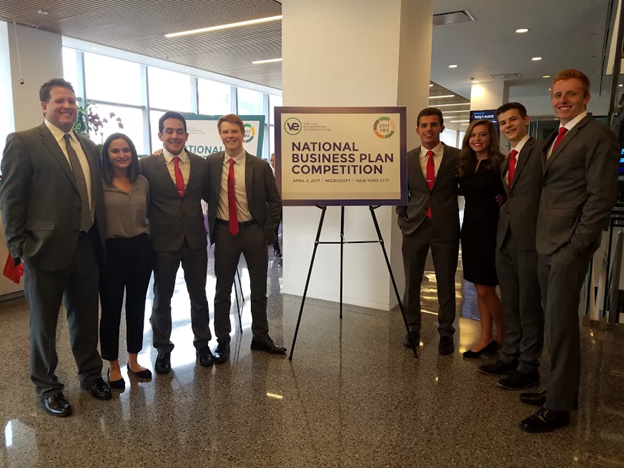 VEI, or Virtual Enterprises International, is a class that spends the whole year creating a business. Five hundred other high schools in the United States have this class, in which students have virtual bank accounts with virtual money, and act as workers for the company they create.

They then go out and act as consumers as they spend their virtual paychecks on other VEI businesses via the VEI portal, a “hub for commerce and curriculum,” as business teacher Mr. Cook describes it. For this reason, the interaction within the class makes real the importance accountants, a marketing department, administration, and a sales department.

“VEI is not your ordinary class. We do not even consider it a class, but it is a business. The class is heavily dependent upon the students to lead each day because each class period is time for the business to operate,” said senior Chris Walther. “Each day every department has a Chief, for example the Chief Financial Officer, which will lead that department in any tasks and meetings that day. Our daily purpose and goal is that every department is working efficiently and effectively in order for us to grow as a business.”

“There are various different departments in our business and each department is led by a chief officer. After an interview process, I was selected as the Chief Marketing Officer. Everyone has their niche in our business and were able to put their talents on display throughout the year whether it was in web design, sales, accounting, etc. This class serves as preparation for what a real-life business job would be like. The goal is ultimately to create a successful virtual business as well as develop valuable business skills,” said senior Dillon Zasada.

At the beginning of the year, students decide what product to sell or service to offer. This year’s class decided to continue with previous years’ business, called Auggie’s, a virtual home furnishing business that offers unique, modern products.

“It helps to be concrete in VEI,” said Mr. Cook. “It’s easier to sell something like unique home furnishings than it would be to sell, oh let’s say like a service. It’s very hard to have a service business, because it’s harder to figure out how much it should actually cost.”

How the competition aspect works is simple. Seven students volunteered to write and edit a twenty-five page business plan. This business plan included the future objectives of the business and strategies to achieve them. They then competed in the State Business Plan Competition in December, which was a ten-minute oral competition at Northern Illinois University.

“Going into it we had no idea what to expect, but the key was that we all had confidence,” Walther said.

The top two teams from this competition then qualify for Nationals, which was in New York. The Cary-Grove VEI team competed against 30 other teams and placed second in state.

“We did not realize exactly what this business plan competition meant, and none of us truly knew how much work it would take. In the beginning we were not as prepared, but then we kicked it into high gear and took off. Every day in class we would make sure our departments were working on their tasks for that day, and then work our business plan. We also had to stay after school many days in order for us to have a fighting chance in the competition,” explained Walther. “There was blood, sweat, and tears put into the business plan, and in the end we were rewarded for it.”

“It was a grueling process but it was an unbelievable experience. At Nationals it was the same format, however, we competed against the top 27 VEI firms in the world.” said Zasada.

Making it to the Nationals competition called for fundraising to be able to afford the trip. The team organized two events over winter break. One was a basketball game, and the other was a volleyball game, each of which had a fantastic turn out. The idea behind these events was to not make people feel obligated.

“So the goal with the tournaments was just to have fun, and so it was five dollars for a student to get in, but it was two or three hours of basketball and volleyball, which, who wouldn’t pay five dollars to play? It’s cheaper than going to the movies, it’s over winter break when there’s nothing to do outside and it’s freezing cold,” Mr. Cook said. “What else are you going to do on a Tuesday over winter break?”

They had also set up a GoFundMe page, and were lucky enough to receive very generous donations from anonymous donors.

“We had a member of the community volunteer to fund essentially a large, 80% or more of the trip and all the costs,” said Mr. Cook. “We are very appreciative of the community and how they supported us, we had people support us through GoFundMe, and we anonymous donations, people who came in to edit our business plan, and listen to us speak about the business, we had a business advisory come in, and they gave us advice, so we are very thankful to the Cary-Grove community.”

Fully funded, the VEI team then went to New York over spring break to compete in Nationals, in which they placed in the top 11 teams. Not only this, but junior Sam Gamez and senior Tom Cassidy placed in the top 12 out of 70-some teams in the Global Business Challenge. The students not only competed and placed, but were able spend time with each other, as well as explore the city.

“At Nationals it was, for me it was something like a once-in-a-lifetime thing that I’ll get to do,” said Gamez. “Even though you can take the class twice, that group that we had was just a phenomenal group. You could not get that same group if you had VEI one hundred times over again. It was a successful trip to New York, and then experiencing the city, it was amazing, it was so much fun, and I couldn’t thank Cook and Miller enough for taking us there, and giving us this experience.”

“New York was one of the best times I have ever had. From being able to compete in a National competition with 6 of my best friends to walking through Central Park, I just felt like the luckiest guy in the world. The city itself is indescribable. I went into it thinking NYC was just a slightly bigger version of Chicago. I was definitely wrong; NYC is humongous with skyscrapers on every block,” said Zasada. “It was so humbling and was an experience I’ll never forget.”

“We were able to explore New York City and stay in the middle of Times Square. We ventured into Central Park, went to the 9/11 memorial, gazed upon the New York City Skyline at the top of the Rockefeller Center, and applauded a Broadway musical. But none of those unbelievable experiences were my favorite,” said Walther. “The best part about the whole trip was spending time with the team, and creating an unforgettable journey. Most of us on the team did not know each other well in the beginning of the year, but after everything we had been through, by the National competition we were a tight knit group including our teachers, Mr. Cook and Mrs. Miller.”

The team members were extremely grateful for the experience, as well as their teachers. Through VEI, some have learned and improved business skills such as public speaking, some have found what they are passionate for, and what they want to do for a living, and have also have formed lifelong friendships.

“Not only we were able to be successful from our hard work, but we were able to develop friendships that I am certain will continue long after college,” said Zasada.
“VEI has taught me many skills and qualities I need in order to succeed in the business world and life, but the biggest one is that in order to live each day to the fullest and find a career that I love,” Walther said.