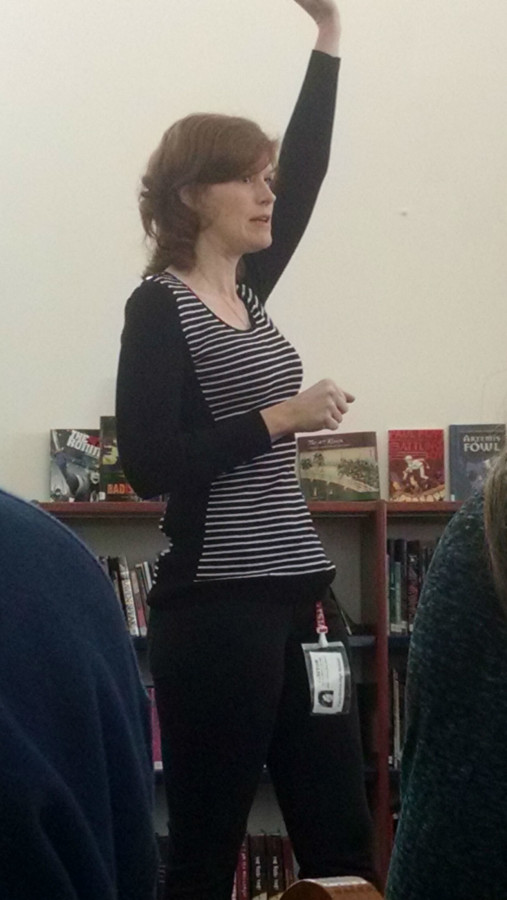 Joelle Charbonneau, author of the popular book series The Testing, came to Cary-Grove this past Tuesday, February 10th, to talk about her books, writing and life. The author visit was the first of its kind for C-G and had been in the works for months.

“It’s really been a team effort, organizing it,” head librarian Mr. Krystal said. “She has a nephew that goes here, and we also found out that her husband graduated from Cary-Grove.”

The local connection, however, isn’t the only reason that the team chose the bestselling author – there are also several freshman and sophomore classes who have read her books.

“[It’s] interesting, because you have both groups of students and teachers who have a lot of experience with the stories,” Mr. Krystal said. “[They had] the opportunity to ask the author questions about not just the writing process, which is what normally what these presentations are like, but also decisions about the story and characters.

“It’s just one more thing that we could bring to the students at Cary Grove to give them the opportunity to be connected with literature, with authors, with the stories that they’re enjoying.”

Charbonneau presented for six periods, and spent the time taking questions from the students who had signed up to meet her.

“She actually got into the inspirations of the book,” said Emily Frey, a senior in Mr. Neff’s creative writing class, which attended the presentation fifth hour. “You could probably relate to her in any walk of life because of how she presented herself and the stories she told about her life.”

One such story was about the reaction Joelle received the first time she sent a manuscript to a publisher. The publisher essentially called it the “worst manuscript they’d ever read” and she was encouraged to “burn it” and then stop writing altogether.

“I thought it was impressive how many times she got told ‘no’ and she still kept going,” said Savannah Eisenmann, another senior in Mr. Neff’s class. “It wasn’t just how to go about writing a book, it was how to live life.”

The conversations also branched into less serious topics, such as Joelle apparently being put on a federal watch list for having googled such topics as “How to build a bomb” and “How to blow up half of Australia” while researching for her books.

Despite Charbonneau’s fame, Eisenmann said she was “humble” and open when presenting, which made it easier to engage with her.

“She was very real,” Eisenmann said. “She was quirky. She wasn’t up there like a robot. You could definitely tell she was being herself. This was her. She made it very amusing, and even the people who didn’t like reading, they had fun.”