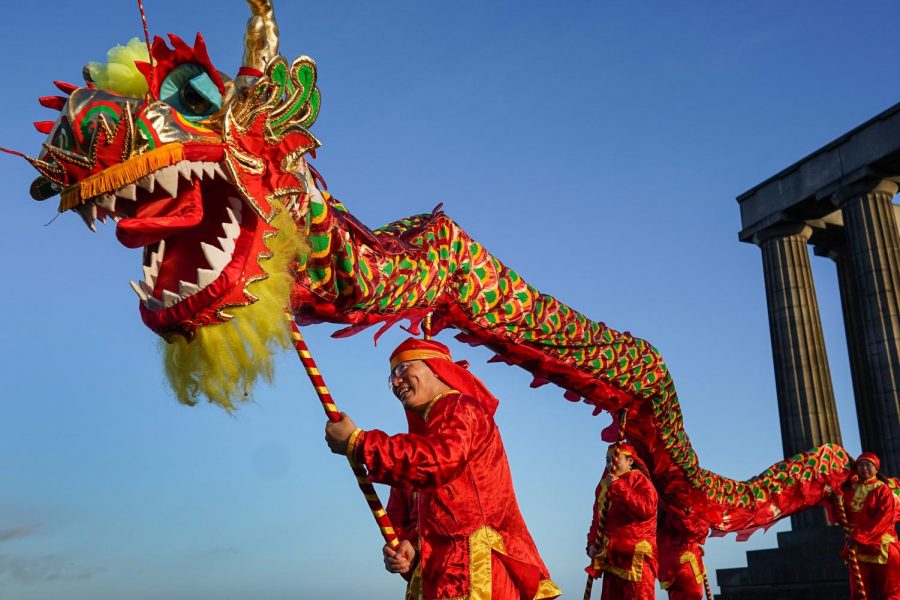 Chinese new year celebrates the arrival of a new year, which is also the beginning of spring according to the lunar calendar. This is why it is sometimes called the Spring Festival.

It is probably the most well known and most important Chinese Holiday and has many well-known traditions, such as the lantern festival and the dragon dance.

Chinese new year lasts fifteen days. On the lunar calendar, the new year’s celebration lasts from January first to the fifteenth. On the solar calendar, it is usually sometime from January to February, but it changes every year.

Almost all stories about the new year celebrations have many different versions, which tends to happen after thousands of years. My favorite story is that the jade emperor declared that there was to be a race to determine the rank of each animal in his guard. After several hijinks, the rat won first place after hitching a ride with the ox across a river.

All the rest of the competing animals except the cat finished, and the order coincides with their number in the cycle. Apparently, the rat, who had bad blood with the cat, had pushed the cat into the river, which is why cats hate rats.

Each year of the twelve-year cycle has a corresponding animal. The new year is referred to with the name of the animal, such as “the year of the rat” for 2020.

Another story about the Chinese new year is about a monster named nián (年) who terrorized a Chinese village every new year, eating the residents. Every year, the villagers would hide in the nearby mountains, until a wise man told them how to scare off the monster.

That year, the villagers pasted red paper to their houses and set off firecrackers and fireworks, which scared the monster.

This story is the origin of many traditions, such as fireworks and firecrackers, as well as the red door couplets. These are red pieces of paper with Chinese writing on them, which decorate doorways. While there are many stories about the origin of red envelopes, it is sometimes attributed to this story.

A variation of the red door couplets is a red square with the word “spring”(春) or ”luck”(福) written on it. Once the new year arrives, the paper is turned upside-down, as the word for “to flip” is the same as “to arrive,” so it would mean “spring/luck has arrived.”

During the Lunar New Year, people may say nián nián yǒu yú (年年有餘), which roughly translates into “to have surplus year after year.” The last word, 餘, sounds the same as the Chinese name for fish, 魚. This is where the tradition of eating fish comes from. When eating fish during new years, it is customary to peel off the bones and continue eating around without flipping the fish over, as the fish flipping over symbolizes a boat tipping over. This tradition is mostly aimed towards fishermen, but you can never be too safe.

Sticky rice cake/年糕: NOT A CAKE! An acquired taste, but I like it. 7/10 would recommend.

In Chinese, the phrase nián nián gāo shēng (年年高升) means to advance into higher positions year after year. The middle two words, 年高, sound the same as 年糕, which is why people eat it during new years.

Usually made by the kids when the parents need to give them something to do when everyone else is making dinner. The roundness of the food is supposed to symbolize the family being together and with harmony, but TBH it’s way more fun to make weird shapes.

Sweet rice balls with sesame filling/湯圓: An acquired taste, but I love it. Apparently there are other fillings besides sesame, but do yourself a favor and stick to the OG. 8/10

The symbolism and stuff is basically the same as the sweet rice balls, but it just tastes better.

Dumplings/饺子: Basic, but a classic for a reason. Making them is labor-intensive, but the whole family does it together. 9/10 is only sort-of a new years food.

Dumplings are eaten year-round and are incorporated into most Chinese holidays, but they are considered new years food. Making them tends to be a whole day’s worth of work with the whole family, and it’s fun, but very messy. The dumplings can be folded into the shape of traditional Chinese gold ingots, which were not shaped like bars, and symbolize wealth for the new year.

Spring rolls/春卷: Has all the widespread recognizability as dumplings, but isn’t nearly as good. 4/10 at least it’s pretty versatile.

Spring rolls are lucky because they are shaped like gold bars, and therefore will bring prosperity. You’re probably familiar with fried spring rolls, but they can also be steamed. Spring rolls can be serve as an appetizer, entree, or snack.

A portable stove is filled with a broth, which sits in the middle of the table, throughout the meal, people will put the food into the pot to cook. It is eaten with a variety of different ingredients and sauces.

The dragon dance is supposed to bring luck, and features dancers carrying poles attached to a dragon. The dragon is usually red and gold, as those are lucky colors. There is also a similar tradition called the lion dance.

The lantern festival is the last day of the new year’s celebration. This is one of the most recognizable parts of the Chinese new year, partially due to Disney’s Tangled. If you’ve seen that, you have a good idea of what it’s like to see the lantern festival.

However, for the Chinese new year, people will write wishes, usually in four-word couplets, on the lanterns before sending them up into the sky.