10th annual Anomoly still one of a kind 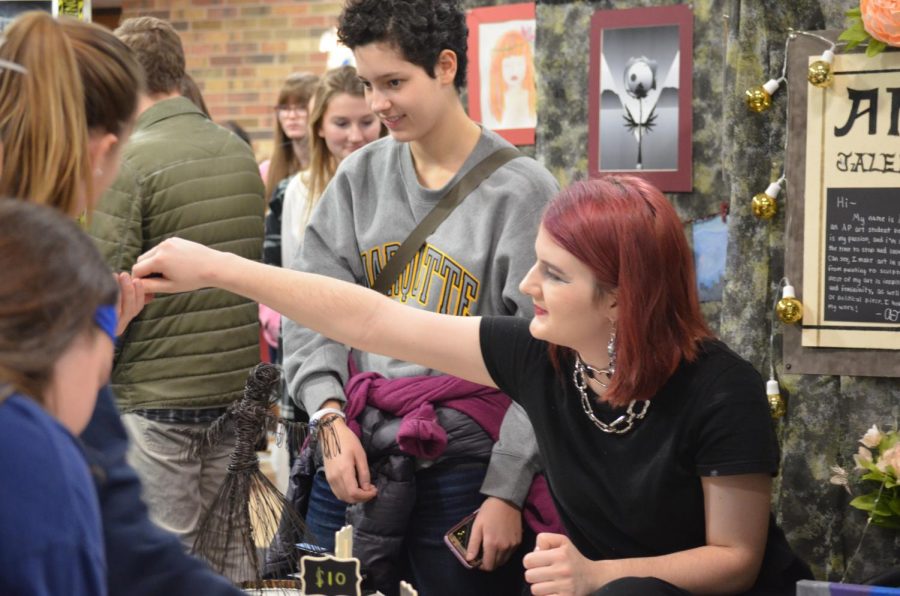 Cary-Grove’s Anomoly art show marked its tenth anniversary this December, and it’s clear that the show has only grown in size and talent over the past decade.

Anomoly is the (mostly) senior art show that takes place in the CG lobby each December. A mix of students from AP Photos, Art 4 and AP Studio come together to present their best works of the first semester for friends, family, teachers, students, ordinary townsfolk and members of CGPAC. Some artists sell work and culinary goods, while others do it just for show or the grade.

So, why is it called Anomoly instead of Anomaly, which is the correct spelling of the word?

“When it was first started,” art teacher Mrs. DiLeo said, “[art teacher] Mrs. Guss was on maternity leave with her second kid, Molly. One of the art teachers at the time named it after her two kids then, Annie and Molly. It is not just ‘anomaly’ spelled wrong.”

For the artists, it’s one of the only art shows just for seniors. However, some juniors, like Nathan Kutok, are included as well due to their artistic talent and placement in senior level art classes. Kutok, who focuses on natural photography and wildlife documentation, was involved because he’s enrolled in an Independent Study course.

Most AP Photos students are seniors, such as Mickey Dotson. Dotson, who focuses on a common topic of gender identity and American activism in their works, takes the show as an opportunity to show and sell their work, but also to educate show-goers on their art’s themes.

“It was stressful and I should have prepared more, and I didn’t know how my work would be received by the public,” Dotson said. “I thought people would take it as an opportunity to have a political debate, and I was surprised when that did not happen. It was a bit draining for me as an introvert, and I really didn’t want to talk to people, so I was glad not a whole lot of people started a conversation with me.”

Of course, AP Photos isn’t the only class these skilled senior artists come from. Jason Miles is currently enrolled in Art 4, previously known as senior studio. Though the class was originally designed for traditional media, it has evolved to include digital media, which is what Jason uses to create his works. His 3D designs are unique, as no other students have knowledge of Blender, his program of choice.

“The best part of Anomoly was preparing for it and getting my board ready,” Miles said. “I found enjoyment from making everything look nice for the show. Honestly, it’s not what I expected. I hoped more people would be around my board. But it was fun seeing others’ work and seeing people interested in my pieces.”

While Art 4 is one of the traditional media art classes, AP Studio is the same class with a slightly more rigorous schedule. Studio artist Ann Talerico specializes in ink-based media and showed off a plethora of works during the show.

“It was a blast,” Talerico said. “I made a lot of money and got to talk to a lot of people who enjoyed my art. I made around $300, and it was nice to make money, but it was fun just existing in my environment.”

Many more artists were involved in Anomoly than could be included in this article. Many fruitful conversations are to be had by talking to participants face-to-face, as this experience was truly unique for everyone involved. Each rendition of Anomoly is unique, and we will be looking forward to seeing past and present CG students next year at the show.