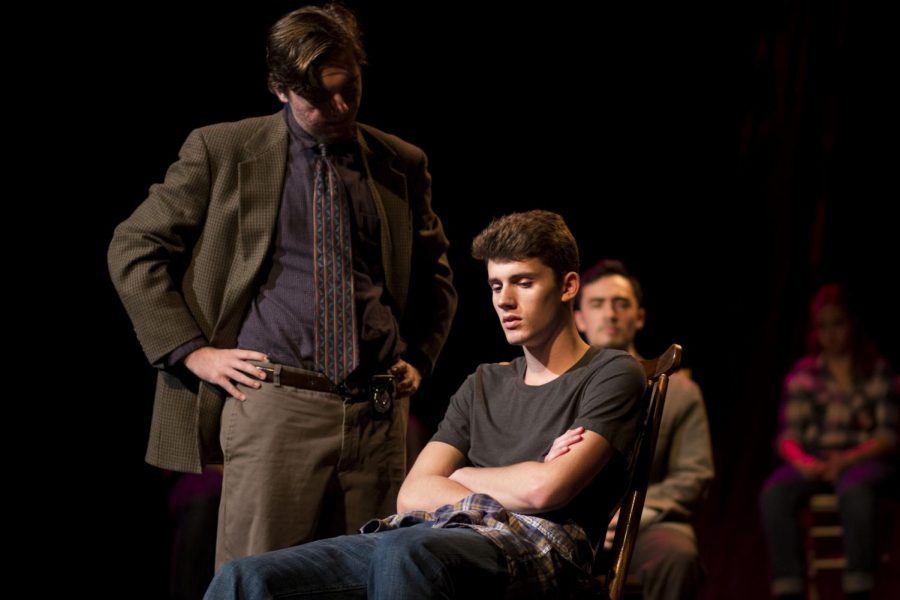 If you saw the drama department’s production of The Laramie Project, you saw 16 actors playing multiple different characters. However, what you didn’t see was the immense pressure put on these young performers to play the show accurately.

Throughout the preparations for this show, the cast had to play characters who displayed extreme hate and negativity, and they had to make it real enough to convince the audience of the intensity of the show.

The Laramie Project tells the story of the aftermath of the murder of a gay man, Matthew Shepard, and all of the hate and protest that followed. This provided a challenge for all of the cast, and led to an amazing, well-played performance.

“It was very emotional,” Ancheta said. “The show has a very impactful message.”

Senior Sean Porter, who played Doc O’Conner, the Baptist Minister, Stephen Belber, and Rob Debree, said that it was very hard to get the hateful lines out, but he had to push past it.

“We ran through it a bunch, but it was always a little difficult,” he said. “We wanted to say it right.”

The cast responded to the heaviness of the play very well.

“We were always there for each other,” Ancheta said. “It’s our job. If we don’t do this right, it’s not worth doing at all.” For him, the hardest part to play was Reverend Fred Phelps, “because of the hate speech.”

As the theme of this production was extremely heavy and controversial, the cast had to be strong as they had to say extremely hateful things and give negative speeches. Both Ancheta and Porter had to play difficult parts, but when the time called for it, they were able to portray the characters accurately and extremely well.

The entirety of this talented cast had their emotional ups and downs while performing The Laramie Project, and they all managed to create a wonderful production. The material of the play was incredibly deep, and all of the cast worked together beautifully to make a truly moving experience. These young actors made CG’s fall play an unforgettable one.