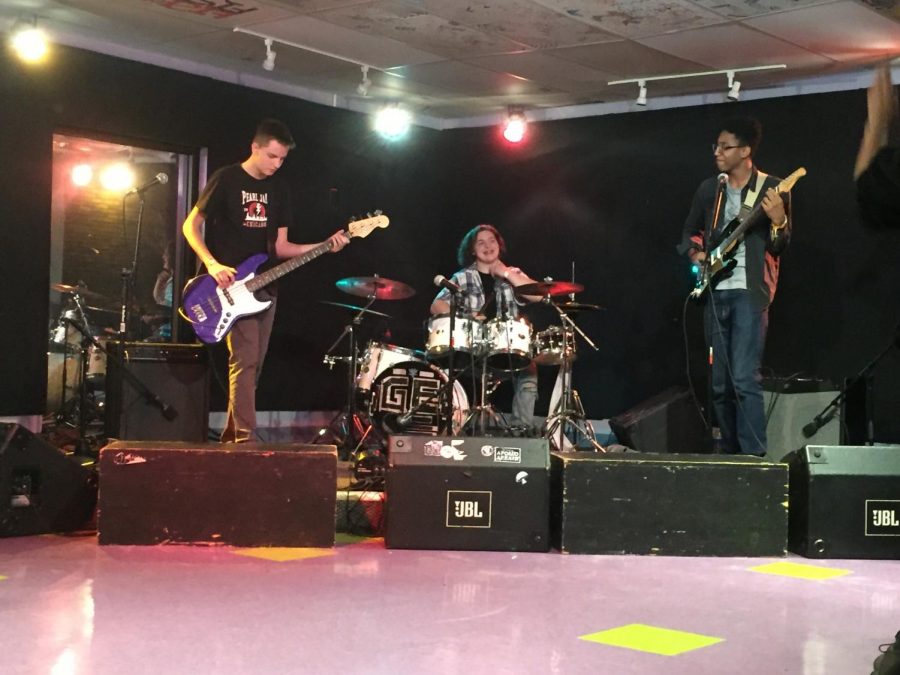 On October 15, three Cary-Grove students banded together and performed their first spectacular concert. The production was full of dynamic energy, with members Michael, Emerson, and Nazarene feeding the crowd power through their sound waves. The crowd was a stampede of Converse and Vans, with friends and fans moshing and milling around. Although their act debuted second, Green Easter rocked the warmed-up microphones with groovy guitar and vocals without feedback.

A few days after the show, the Trojan Times interviewed Nazarene Mitchell (singer and guitarist) and Michael Wlodek (percussionist).

TT: What made you guys decide to form a band?

NAZZY: There was lots of music influence from Nirvana, Foo Fighters, and the like. I really liked the inspiration, and I felt like when I listened to them I felt so good about myself. I wanted to be able to do the same for other people.

TT: You mentioned you were influenced by Nirvana and Foo Fighters. Did any other bands inspire or influence your style?

TT: What’s it like to balance school and your band?

MICHAEL: I don’t pay much attention to school.

NAZZY: School takes over. We practice, like, once every two weeks.

TT: Is there something about yourself you’d like to tell people to get to know you?

MICHAEL: I love technical drumming, and I try to make my drum beats as intricate and complex as possible.

NAZZY: I try to make my guitar parts as groovy, different, and weird as possible. Stuff that makes people say, “Wow, he’s doing his own thing, so maybe I can, too.”

TT: Which class is most enjoyable to you?

TT: How did you guys come up with the band name “Green Easter”?

NAZZY: We were walking around the woods with a friend, making fun of band names, actually. Like Black Sabbath, that’s just a color and a holiday. What about Purple Hanukkah? Gray Christmas? Green Easter? And that last one really stuck with us.

TT: What was it like, performing your first show as Green Easter?

NAZZY: It was a great experience when we were networking with bands. Being live was easy, I didn’t need to try hard to connect with the audience.

MICHAEL: It’s our own stuff, and we know the people. There was a lot of nervous energy and excitement before the show.

TT: Do you have any final thoughts?

NAZZY: Our music will be up on iTunes in about a week or two, as well as on YouTube.