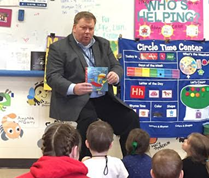 “Principal Sargeant is an amazing man. He takes pride in our school and treats the children with respect. He is always supportive of all the many events & sports activities that keep our children grounded. As a parent, I never worried about my children’s safety. I knew when they were at CG no one would mess with them. That in itself is the greatest gift for a parent. I didn’t ‘worry’ when my children were at school. Lucky for me, my youngest is a senior. We all adore him. Glad he will still be at CG, just not as our fearless leader.” – Maria Larsen

“One of the many great impressions that Sarge made on our family is something I will never forget. It was graduation day for the Class of 2012 & the C-G Varsity Softball team was in the playoffs out at Huntley High School. Halfway through the game it was put on a rain delay. Both teams agreed to finish the game after the C-G ceremony later that day. We all know graduation is a crazy day for a principal, but Sarge is not your regular type! The ceremony ended and our family booked back out to Huntley…. only to find that Sarge beat us all there! Our fondness for him just kept growing from there.” – Tracy Kendeigh

“We have several fond memories with Sarge over the years. What stands out for me is the enormous support he provides to his student-athletes. My daughter played on the 2016 volleyball team. He was a constant support to them, whether drumming up attendance, giving motivational talks, or just a friendly “go get ’em”. He became their personal cheerleader! He was at most games (even away) all the way up to and including State. When the team returned with the 3rd place trophy, there he was, like a proud Papa, to meet them off the bus and to accept the trophy. I don’t think there was a dry eye. Thanks, Sarge, for spreading yourself thin so that your students know for certain that you care! You will be missed!” – Renee Splitt

“The beautiful new Cary-Grove Fine Arts Center would never have been built without Mr. Sargeant’s support, guidance and commitment to doing everything in his power to make this dream a reality for the students and community of Cary-Grove. Throughout a period of six years, Mr. Sargeant went to bat for this project – personally and professionally. Among his many accomplishments at CG, Mr. Sargeant successfully navigated a partnership between a private foundation and District 155 in order to secure a significant capital improvement for CG – no small feat in these trying economic times. To say that I will miss Mr. Sargeant is an understatement, but each time I enter the theater I will think of him with admiration and gratitude for saying YES to this project and making it happen. Thanks, Sarge!!” – Mrs. Wilhelmi

“10 years ago, CGHS was in dire need of a leader who would get CG “back on the map.”  We were interviewed and surveyed by district personnel that wanted to get it right for the new principal at CGHS.  I had heard many great things about Sarge before he step foot at our school.  The stories of how good of a math teacher he was to how influential he was as a coach to his leadership qualities as an administrator, the list goes on.  When he got hired, Sarge gathered the staff in the old auditorium, introduced himself and delivered his message to us….”I’m not looking for good teacher, I’m looking for GREAT teacher!”  I will never forget this initial statement from our leader.  It inspired me to be the best teacher possible, each and every day.  I look up to Sarge and wanted to lived up to his expectations.  It was evident from day 1 what he wanted CGHS to be.  That was simply the best school around!!  He modeled it for everyone to see.  It’s hard not to give your best when he’s doing the exact same thing.  He will be missed!” – Mr. Garis

“Actually connecting to students in a very positive way. He’s just a cool dude who tells the students what’s what without taking down to them.” – Paulien Kock

“I knew that I would be emotional during my son, John Donohue’s, Class of 2012 graduation, but I wasn’t prepared for Sarge to break down three different times during the ceremony. His emotional attachment to his students was so apparent especially during events such as graduation. He has been a gift to our high school and all of the families that have been lucky to know him.” – Laura Donohue

“So, a story about Sarge. There were multiple times during even the non-school year that Sarge would approach me to just talk to me about future plans and such. One specific story was at graduation 2016. It was a day after I had received “Most Likely to Teach at CG”. When shaking my hand at graduation, he said that there will always be a spot for me to come back to CG once my college years were over, and honestly, that is such a great description of Sarge in a simple sentence. He always approached students with open arms, mind, and heart. No one made me feel the way that Sarge did when I walked through the doors. Even if it was a simple, “Nice hair!” comment. He truly made a bond with his students, and I feel bad for the future students that will not be able to experience what I, along with many others were lucky enough to experience.” – Dakota Zientek

“My junior year started off pretty rough, I had just moved about 15 minutes away from Cary and found out that I wasn’t considered in the correct boundaries to attend cary grove. As I have moved and had to switch schools before, I was not thrilled. I had to start all over again, no friends, no teachers I knew and could reach out to, and a whole new place to navigate though. I went to this new school for about a semester and decided I’d had enough. I went to the school’s office and asked what steps I needed to take to transfer back to Cary Grove high school. After two rough drafts, I made a proper transfer request letter and sent it to cary grove. I’m happy to say I am now finishing up my senior year at the school I belong at, thanks to one of my biggest advocates, Mr Sargeant. If it weren’t for his kind heart, determination, and understanding I would still be at that other school. I owe him a big thank you!” – Natalie Mikels

“The high school students loved having Sarge come on and read to the children.  In fact, they would often ask if the “man” was going to come back to read another story for them!  It doesn’t matter the age of  the child, Mr. Sargeant loves them all.” – Mrs. Jacobson

“My favorite thing about Sarge is how he’s just a big teddy bear. I don’t think a graduation ceremony has gone by without him crying during a speech. He’s known for doing that at some of our staff meetings too when he talks about what a great staff we have here at C-G. He leads with his heart!” – Mr. Neff