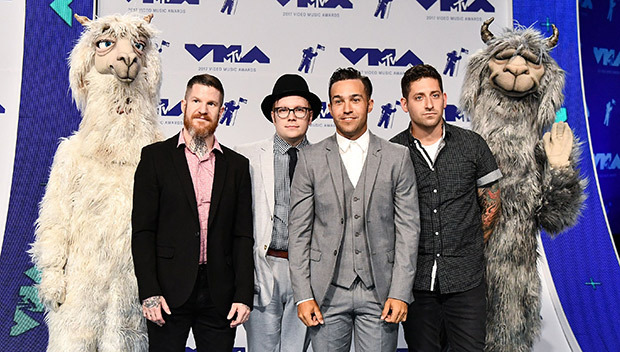 Fall Out Boy has been on everyone’s radars recently, what with their cryptic messages in music videos, recent obsession with the color purple, and dressing Brendon Urie of Panic! At the Disco in a llama costume.

In addition to those headline-grabbing antics, they’ve also released three songs from their long-delayed and highly anticipated album Mania, and fan reaction has been mixed.

The first song they released was “Young and Menace,” and their fans didn’t know how to feel about it. “Young and Menace” has a very electric dubstep feel, much different from their usual sound and their promise to save rock ‘n’ roll.

This song introduced the llamas, and they quickly became a meme among the fandom. In the video, the llamas were parents to a young girl, living in a secluded llama village who happened upon a magazine advertising family activities. Instead of keeping it to herself, she showed the llamas. They lashed out at her and she ran away to a carnival, and when she was asking for help, no one could understand the language she spoke. At the end of the video, the parents are actually humans instead of llamas, only furthering fans’ confusion.

Looking closer, the song was about domestic abuse. She saw her parents as something other than human, and they didn’t do anything together as a family. The language she spoke but no one understood was of her own experiences, begging and pleading for help. Fall Out Boy tends to hide meaning in their music videos, and this was definitely one of the more hidden ones.

The next song they dropped is called “Champions,” and is much closer to the usual sound that fans are used to.

The message the song portrays is clear in the lyrics, “If I can live through this, I can do anything.” Many of Fall Out Boy’s songs are meant to encourage their fans to keep going, even when things look grim.

This music video showed people in virtual reality, portraying how while you may want to be someone else, you eventually have to take off the mask of the person you’re not and be who you truly are. This music video was much more open about its meaning.

The idea behind the music video could tie to the band itself, since they’ve started to get more popular, and are starting to revolutionize their sound, changing who they are as musicians. This is the same change that is costing them some fans who believe they sold out after “Immortals” was written for the Disney movie Big Hero 6.

Released on September 13, their newest song, “The Last of the Real Ones,” has the closest to their usual style: heavy beat drops, piano and guitar.

This highly energetic song’s music video once again features the llamas from “Young and Menace,” but it’s unclear if the two videos are related. The llamas are shown getting out of a car and starting a fire before going back to their car.

Inside the trunk is Pete Wentz, the band’s bassist and lyricist. The llamas hit Wentz with a shovel repeatedly. This is not the first time Wentz has died in a music video — it has happened to him about four times.

Ending credits roll after that. The credits are quite humourous, including “Body Removal By/ His name is Jeff,” “Llama wrangling specialists/ Blackbear” and “Pete Wentz as Pete Wentz.”

The original release date of the album was September 15, but the date was pushed back after singer Patrick Stump reportedly “accidentally deleted them” and had to rewrite the whole album with Wentz.

This new age band is a base of the “emo trinity,” but their fame never stops them from giving back to their beginnings openly. On September 14, they started the Fall Out Boy Fund.

They’re going to donate to Back to the Roots, a foundation that teaches kids how to grow their own food. WIth their fund, they plan to supply 20,000 elementary kids with their own gardening kits.

On tour, the band plans on giving back to their fans with two free tickets per show, and making a donation to a charity of their choice using the Fall Out Boy Fund. This revolutionary band is helping give back to the city closest to where they originated from, Chicago. They hope to help those who contribute to their community and their hometown.

Know any Fall Out Boy fans who meet this criteria? You can learn more about it and where to sign them up on Fall Out Boy’s website: championofthemaniatour.com.