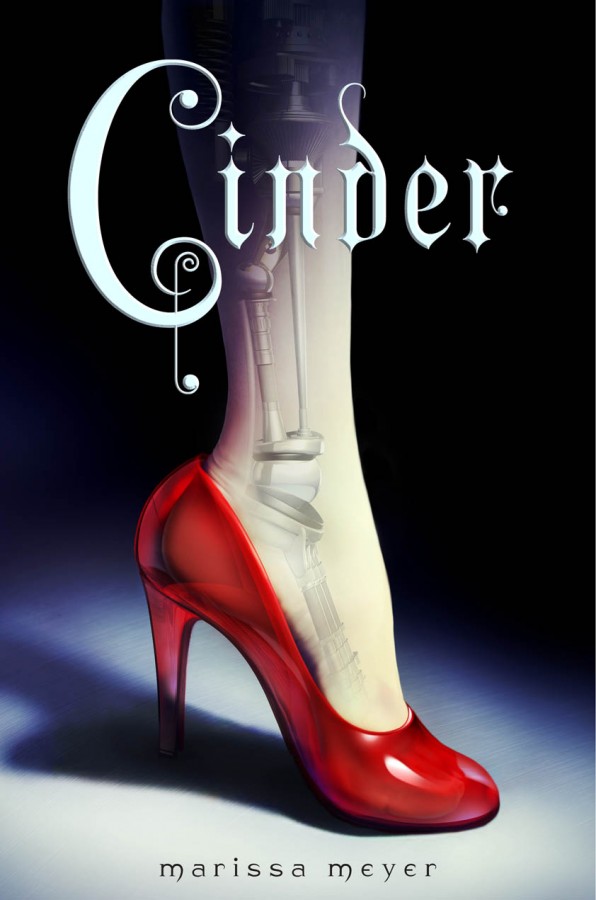 In the spirit of this spring’s musical I decided to read Cinder by Marissa Meyer. Well, that and the book had been staring at me since Christmas.

Cinder is a retelling of the story Cinderella by the Grimm Brothers, though it is more similar to Disney’s Cinderella. In the movie, Cinderella was the daughter of a wealthy man who married a wicked woman with two daughters who force her to work as practically a slave.

Cinderella sneaks out to a ball, meets a prince, loses her shoe, and then the prince tries to find her by making the female population of his kingdom try on the shoe. When he eventually finds Cinderella, he marries her as soon as possible.

In Cinder the main character is a cyborg, tomboy and mechanic. In fact, she is one of the best mechanics in the Eastern Commonwealth, where she lives.

Early on in the book we find out that Cinder was adopted when she was 11 and that she has no idea who she was or where she came from before she became a cyborg. The man who adopted Cinder, Linh Garan, accepted her into his family but his wife was less than happy to have another mouth to feed, let alone a cyborg.

Garan dies of a deadly disease called Letumosis, which has been plaguing the Earth for years while the Lunars, a race of people who live on the moon, stood by and watched.

The emperor of New Beijing fell ill and the research doctors grew even more desperate for a cure with Prince Kai pushing even harder for a cure to save his father, drafting cyborgs to test the cure on. Prince Kai is basically the most sought after person by everyone in his country. Even Cinder becomes one of his admirers after Kai asks her to repair his android (the robot, not the phone).

This leads to her and Kai becoming some type of friends, and her stepsister Peony is one of the only ones who knows. Peony is one of Cinder’s only friends, having treated her like family since she was adopted. Cinder is soon taken into the cyborg draft and what happens after that is pretty great.

The book’s theme was really about discovering yourself and becoming your own person, similar to the theme of Cinderella, who broke free of her controlling family by staying true to herself.

If you like Chanda Hahn books then you’ll definitely enjoy this book. It has action, adventure, romance, and magic — what more could you want from an almost-fairy tale? The book ended with me wanting more, and it’s a good thing, too, because there are several more books in this series.